The currently beleagured John Reid has been passed the J7 Truth Campaign letter to Tony Blair and this is his reply: 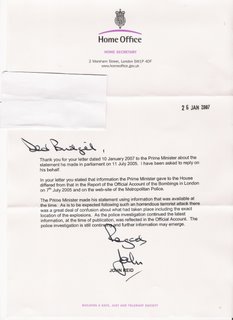 (click to read)
Are we to assume from this that on 11/7/05, the 'information that was available at the time' was that at least two of the trains were travelling towards Kings Cross? Did this information only change to fit the story of 4 men travelling from Kings Cross?

John Reid and Tony Blair need to explain why this information was wrong in the first place, after all, 4 days should be enough time to know in which direction the trains were travelling and from which stations. It is insulting to the victims' families, the survivors and the British public that Mr Blair's first statement to the House - one which appears on the website of 10 Downing Street - should contain such ludicrous errors, just as the Official Report published by the Home Office claimed that the 4 men travelled on the 7.40 Luton train that was cancelled and never ran on 7th July 2005, an error for which we have yet to receive any explanation.

(As for the motto the Home Office have the nerve to print on the bottom of their correspondence 'building a safe, just and tolerant society' I think not).
Posted by Bridget at 11:15 am 13 comments:

A Letter To Tony Bair

It never ceases to amaze me how very few facts regarding the events in London on 7th July 2005 have ever made it into the public domain. The few facts that have, though, are inconsistent, muddled and contradictory. Trying to assemble these facts into any kind of cohesive account is like trying to put together a jigsaw-puzzle and wondering why the pieces don't fit.

On behalf of the July 7th Truth Campaign I have sent the following letter to Tony Blair and a FOI request to the Home Office:

In your statement to the House on July 11th 2005 in respect of the London Bombings and as reproduced on the No. 10 website you stated the following:

“I will now try to give the House as much information as I can. Some of it is already well-known. There were four explosions. Three took place on underground trains - one between Aldgate East and Liverpool Street; one between Russell Square and Kings Cross; one in a train at Edgware Road station. All of these took place within 50 seconds of each other at 8.50 a.m.”

Mr Blair, this statement was made some 4 days after the events and yet the information that you gave is contradicted by other official versions.

According to the Official Report published by the Home Office on May 11th 2006, the explosions took place:

As you can see this information differs from the information that you gave the House and we would like to know why there is such a major discrepancy between these two statements.

If you then contrast both your statement and the official report's version with that given out by the Metropolitan Police in their One Week Anniversary appeal news conference:

You will notice that there are even more discrepancies here with the statement that you made to the House on the 11th July 2005.

Could you please clarify why you stated:

That a train was travelling between Aldgate East and Liverpool Street

That a train was travelling between Russell Square and Kings Cross

That a train was in the station at Edgware Road.

We find it hard to understand how such basic information such as which train and where that train was, should appear so muddled, if what we are being told is actually a true and factual version of these events,

On 1th July 2006, Dr John Reid announced to Paliament that the Offical Report's claim that the 4 accused travelled on the 7.40 from Luton was wrong. To date, there has been no explanation for this error:

On July 11th 2006 Dr John Reid made the following announcement to the House:

...I have assured the House in the past, and assured the families of the victims of the 7/7 tragedy, that we would inform if, at any point, new information on anything came to light. In that context, I tell the House tonight that, at the end of last week, I was told that a discrepancy had indeed come to light. The official account that we provided to the House states that the train on which the bombers travelled left Luton station at 7.40 am. The police have now told us that that is incorrect—the train in fact left Luton station at 7.25 am. It did, however, arrive at Kings Cross at 8.23 am, as recorded in the official account. Although that does not appear to affect anything else in the official account, it is nevertheless an error, which is why I report it to the House. I can understand why this may be of concern to some. I have asked the police, as Members would expect, for a full report on how that discrepancy came about. I will ensure that the official account is amended and will write to the survivors and to the families of the victims on this matter.

Despite the assurance from Dr Reid that the report would be amended, the pdf download on the Home Office website still has the accused travelling on the 7.40 from Luton.

1. We would like to know why the train time of 7.40 has not been amended in the Official Report.

2. We would like to know if a full report has been received from the police explaining how this discrepancy came about.

3. We would like to know when this information will be made public.